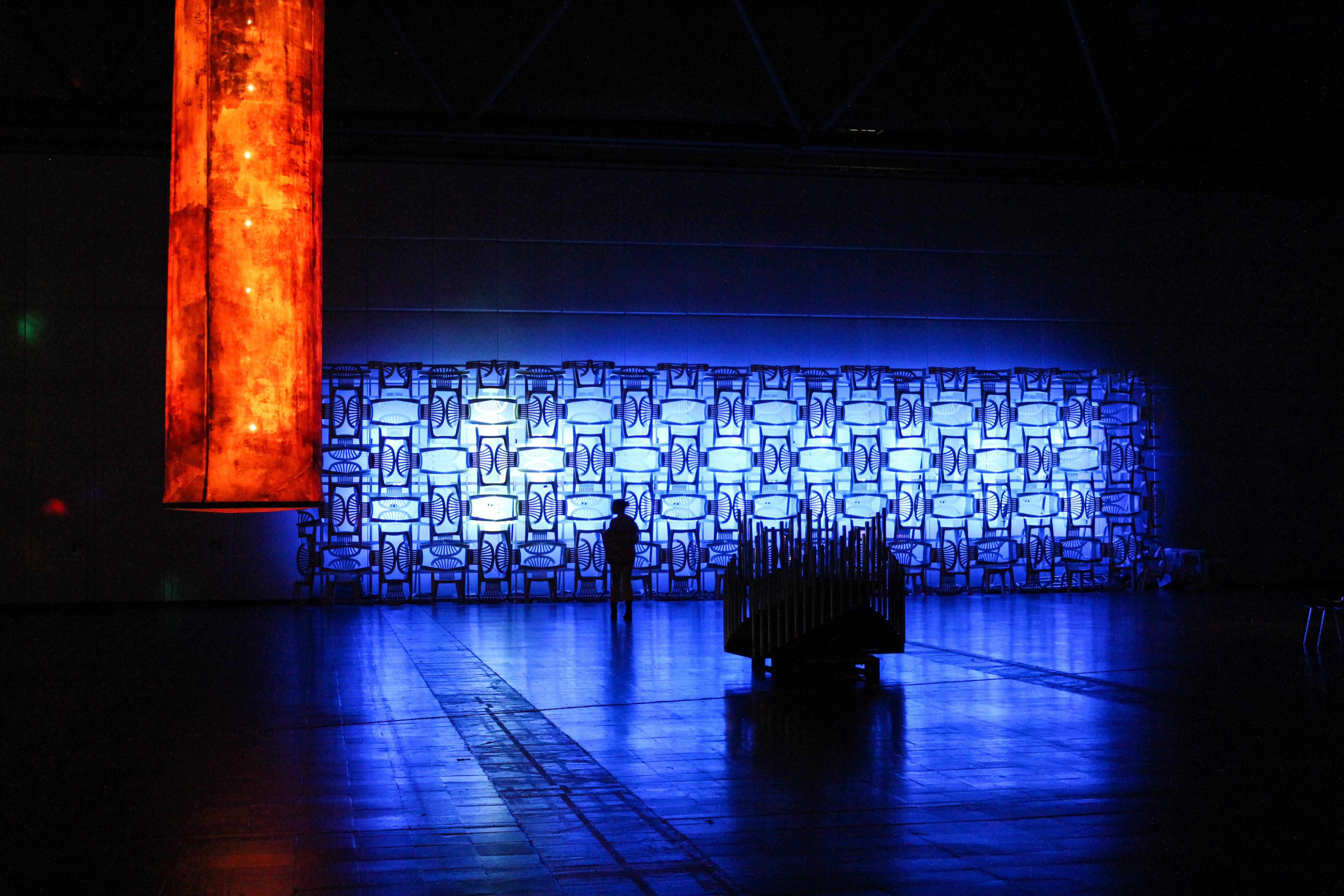 Production Manager Titles: Learn How To Get Them Right!

Everybody grab your pens, we’re getting down and dirty with production manager titles! So, we’re very much aware of how confusing job titles can be in our industry. And especially when we’re talking about technical roles. It seems like everywhere you turn, someone is doing something very specific. Something very specific that brings along a particular title, to the point where you almost need a cheat-sheet with all the terms you need to get right.

But worry not Whiteboard Wednesday is here to deliver your weekly dose of wisdom. This time around, our lovely host is Stephanie Jayko, a stage, production and event manager. Stephanie is ready to break down all the production manager titles you need to know, and how to not mix them up. So press that play button and join us for another amazing episode! 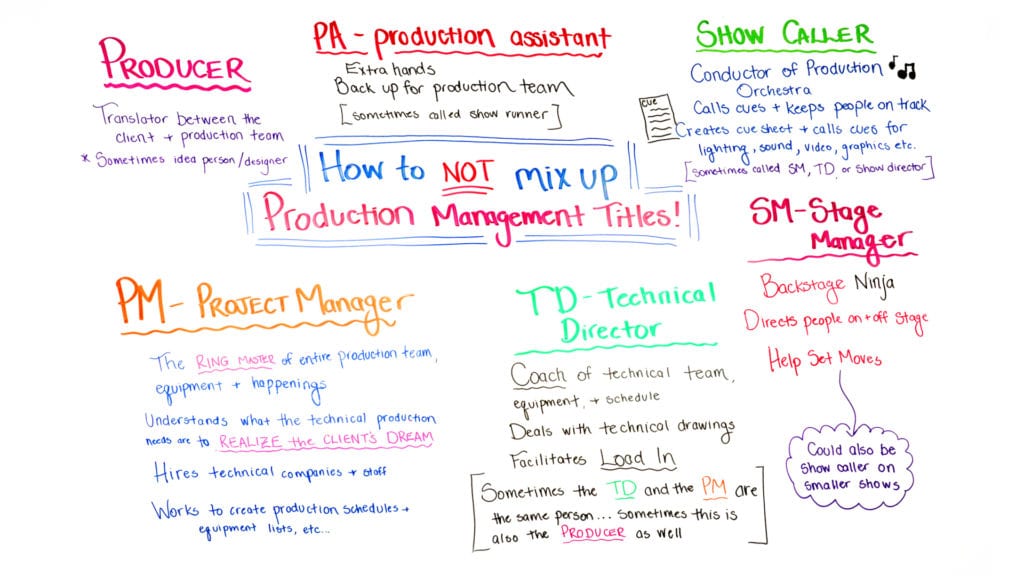 Production Manager Titles: Learn How To Get Them Right! – Video Transcription

Hey everyone, I’m Stephanie Jayko, CSEP with Knock Out Productions. And I’m here for another Whiteboard Wednesday. We’re going to talk a little bit about some production management titles and how not to get them mixed up. I know that we have another episode a little while back. If you go scroll over here somewhere, you can find another episode that we talked about all sorts of technical production people and their jobs and their titles. But we’re going to dive a little bit further into some of the management roles on the top end of that list. And figure out what exactly they do and how sometimes we call them different things and get them mixed up a little bit. So we’re going to dive right into that and talk about those things today.

So then we come down here, the PM, the project manager. Or sometimes they call it the production manager. This person is like the ringmaster of the circus of events and production. They do the entire production team, the equipment, the happenings, the schedules, the goings-on. So they’re the logistics person as far as what comes next and underneath and fills out the blanks of everything going forward in the process of building an event. They understand the technical needs of all of the things that are coming from the producer. The big ideas, the dreams, and this is what we want it to look like, the design. The project manager, the production manager, they take all of that and go, “Okay, what do we need to make that happen and how can we realize the client’s dreams?” So they understand all of that and know how to put all of those different things in line.

And they’re the ones that hire technical companies and people underneath them. So all of those other jobs that we’re going to talk about and all of the other technicians, this PM is really responsible for bringing all of those pieces together and hiring those people. They also work on production schedules and equipment lists. So a lot of the ordering and hiring and all of that kind of stuff. So they really put together all of the needs of the event, technical and production side of things.

Sometimes they’re creating them. And sometimes they’re hiring the people who create those and working with all of the technicians and technical companies to get all of the equipment that the PM has said we need into the room. And how that’s going to go into the room and how that all relates to each other. They deal with facilitating loadings and strikes. So, anybody that comes in as a technician or as a hand, a stagehand to build the whole thing out, the technical director is working with those people to make sure everything is happening the way it needs to happen. And getting everything put together. The big puzzle. So this is the puzzle master, the coach, fitting everything together.

And sometimes, what gets confusing, here’s where we start getting the mix-ups going. Sometimes the TD and the PM can be the same person. So we get a lot of that happening where the TD and the PM are the same people. Because they both know so much about the technical stuff and about the equipment and the people and who’s going where and what’s happening when. That sometimes they’re the same person. Especially on small to medium shows, that could very well be the same person. And even on some smaller shows, that could also be the producer as well. The producer could be wearing all three of these hats. And it just depends on budgets and clients and sizes of the event. So we could see the TD, the PM, the producer, and as we said, the producer could sometimes be the client. Here we have all getting into the mix up of stuff. And that’s getting into the confusing part. So that’s the first three people that we’re going to talk about on the top tier.

Once we get from there, we start going a little deeper into the actual nuts and bolts of the event, we get to the stage manager. The stage manager is someone that you all have probably seen running around like a chicken with their head cut off backstage. I call them the ninjas because they’re usually all in black with a headset on. Telling people where to go, getting people on stage, moving furniture to the right places. They are the person who knows everything backstage. They get people on and off stage safely where they need to go on time. And they’re very timely people who know exactly who’s supposed to go on when, what’s happening when onstage. So they’re very much in the mix of the backstage world and exactly what’s happening with the show in what order. But like I said, they’re very much ninja-like. Because they’ll just pop up in places because they know where you’re supposed to be, so they’re going to get you there.

So that’s the stage manager. They could also be the show caller on smaller shows. So that’s another thing that we’re going to go up to here. The show caller is the conductor of this whole production orchestra. It’s the person who has all of the cues for all of the technical people, lighting and sound, graphics, any of that kind of stuff. If you’ve got videos going on, special effects, people going on stage, anything like that, the show caller is the one that is making sure that all of that happens at the right time. They’re calling the cues from the show flow or the cue sheet to make sure that all of the technical departments are doing their jobs when they’re supposed to. To make sure that the event looks right and everybody is safe and doing things on time and all of that. So the show caller has a broad view of the stage and the event itself.

And sometimes on smaller shows, as I said, this can also be the backstage manager. It just depends on how many different moves and people and things. So sometimes we get those interchangeably mixed up. But the big thing with mix-ups is with the show caller. A lot of different people call them different things. You could have heard the show caller be called the stage manager. Sometimes we hear it being called the TD, the technical director. Because they’re directing all of the technical aspects of the show, or sometimes the show director because they are directing the show in and of itself. So there’s a lot of different things that the show caller gets called and it gets mixed up sometimes. And I know that we have had a TD already down here and an SM here and who is actually doing what? So the show caller is really the very specific name that we call that so you know exactly what they’re doing, but just know that some of these other titles do get called different things because they function similarly. So if you hear different things, that’s what we’re talking about.

And lastly, we can talk about the PA. The PA is your extra hands. They’re your production assistant. They’re basically somebody who runs around and backs up people and as an extra set of hands for any of the technical management, production management people. A lot of times we have to be in more than one place at the same time, and I don’t know about you, but I haven’t figured out how to do that yet. So having a production assistant is really great for that so I can send them running one way or the other and be my eyes and ears in different places and hands. Same thing with producers and TDs and all of that kind of stuff. So having a couple of PAs onsite for larger events is always a good idea. They’re also called runners for that reason. We’ve had PAs, runners, same difference, all of that good stuff.

So just to recap all of this, this is a big circle of people that we hear lots of different names. The producer is the client-side, is the translator between client and technical production side. They can also potentially be your PM, your project manager. Who could also potentially be your technical director depending on what size show you have and who’s doing what. Then you have your stage manager backstage, your show caller, who could also be called your technical director at times, show director, stage manager, and then you’re a production assistant or you’re a runner. So we’ve got lots of names here, lots of people doing different things similarly to others. So you might hear different things, you might hear exactly this, it depends on who you’re working with different companies and different AV companies. But just so you know, here’s who we’re talking about when you hear these things and know that you might hear different names for them sometimes.

I want to know though, what do you call some of these different production manager titles and how have you gotten mixed up sometimes? What have you heard that you might not know what that position actually is? Give us a shout and let me know what you have to say about that down in the comments there. And we want you to get engaged with us. I want to hear some of these things. If you have liked this video, I would love to hear about it. Give us a thumbs up and subscribe that little button down there. Make sure you subscribe to that because we do these every week. And that’s about it for me this week guys, so thanks for joining us for another Whiteboard Wednesday. We’ll see you soon.

What Do All The AV Labor Positions Do – Whiteboard Wednesday 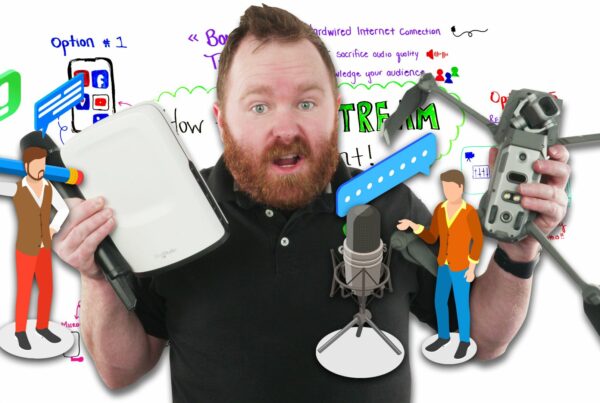 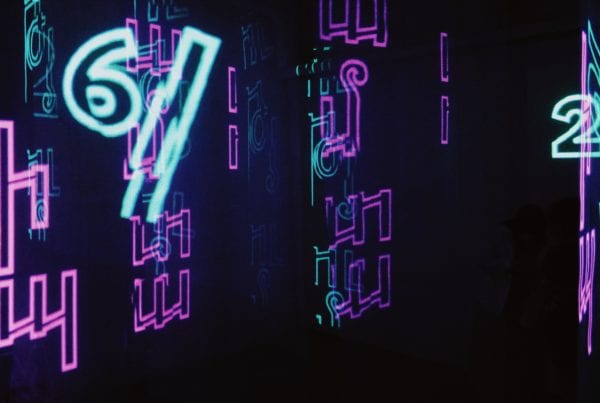 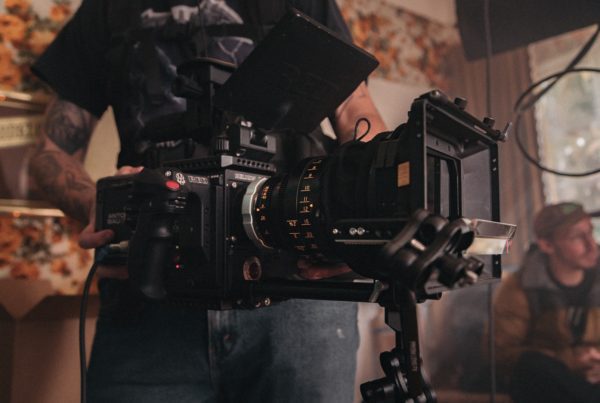 Stephanie Jayko, CSEP is a passionate creative and an accomplished event operations/production manager who is notorious for her leadership of theatrical productions and live events. Her passion for creating experiences for audiences of all kinds shines through in work and dedication to her industry.