How Do In-House AV Commissions Work?

Do you ever wonder why in-house AV bids seem to be high? While there could be many reasons behind that today we are going to talk about one of the most likely causes, in-house AV commissions. Did you know that venues can receive kickbacks for referring their in-house vendor? Makes sense right? It does from a business partnership perspective but those kickbacks can lead to inflated AV costs which hurt your budget. We have heard of these commissions being as high as 60-70%, so think about that, the money has to come from somewhere and that somewhere is you! In this episode of Whiteboard Wednesday Will Curran will take us through how in-house AV commissions work and how they could be affecting your budget. 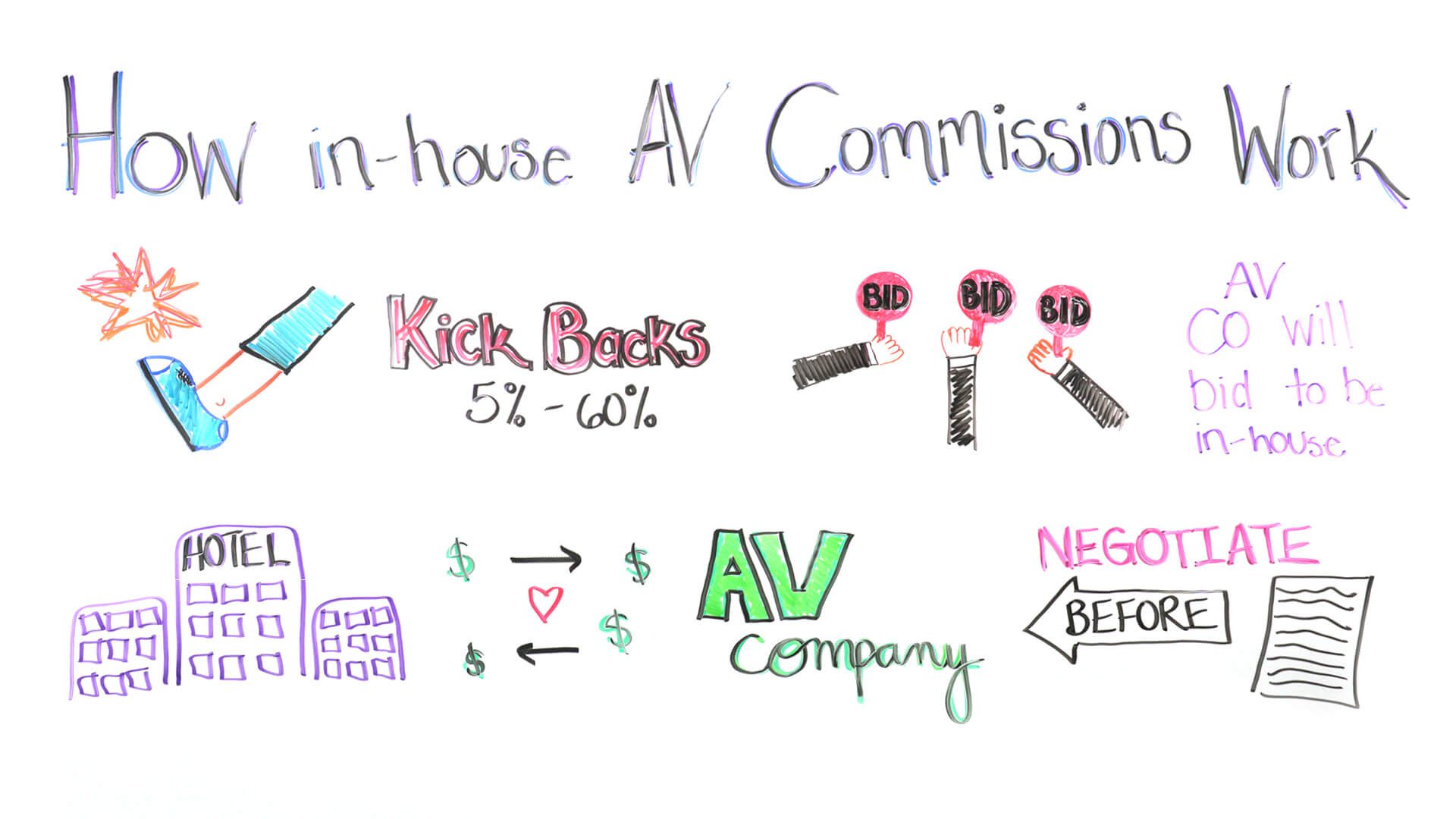 Hey, how’s it going Endless fans? Will Curran back again with another Whiteboard Wednesday. Today we’re talking about how in-house AV commissions work. Recently, Brent Kreuger and I were doing a session at Connect, doing a session called our AV Smackdown, where basically it’s third party AV, basically me versus the in house AV company, who will be not named in this case. Brandt kind of moderates us right down the middle. In those conversations, you learn a lot about as far as how each business model is structured. One of the big things that we talk about that most people don’t understand is, how these in-house AV commissions work. Some people don’t even know that they exist. I wanted to kind of explain what that looks like and essentially understand why people tend to think that in-house AV companies are a little bit more expensive.

So let’s talk about this really quick. For those who don’t really understand, a lot of times, the in-house AV company is contracted by the hotel in a relationship that allows them to kind of work together. Most people understand that, right? But most people don’t understand that there’s a little bit of a commission system that goes on. Let me explain how that works. First of all, the way the process works is that a hotel will say, we wanna have an in-house AV company for convenience for our clients so we always have someone to go to. We always wanna make sure that if there’s any last minute changes or needs, the hotel usually doesn’t wanna manage that, so usually they contract an actual company to come in and do their AV.

So in this case, it’s done through a bid process. Similar to the way that you look for vendors, they will actually look and say hey, we want an in-house AV company. We’ll send out bids to who does in-house AV and who wants to bid on it. The way that’s usually structured is the relationship works that the in-house AV company will have some sort of equipment on site, maybe some sort of staffing and office on site, therefore they will also work closely with their clients. In return, the hotel will share their client with them. So as soon as you sign the hotel contract they say, “hey I’m gonna introduce you to John at the AV company, in-house AV company.” What most people don’t understand though is that there’s usually a commission that gets built into this.

The way this works is that when the hotel shares this business with the AV company, the AV company is usually, and again this all depends on property to property, 100%, but usually, the AV company will then get a kickback of a commission back to the hotel for that business. So, that incentivizes the hotel to give them business, so then that way they get money back. If you’re ever wondering why there’s a lot of incentive for the hotel to work with the in-house AV company, now you understand why, it’s with these kickbacks. You might be thinking to yourself, okay cool, that makes sense right? They’re sharing business? Why wouldn’t they share some sort of revenue with it?

Well, sometimes these commission structures can very vary. They can be as low as 5%, however, in having conversations with in-house AV companies, with planners who were intimate with these topics, we heard numbers as high as 60% for these commission rates. I heard 70% even once. That’s super duper high, so that means 70% of whatever the in-house AV company is doing in revenue is getting kicked back to the hotel. Great for the hotel, they’re making an additional form of revenue, but what that means for the AV company is they’re making less money. Therefore, they have to charge more.

So you can start to see how this in-house commission can sort of effect the pricing. What it basically allows is kind of symbiotic relationship where the hotel’s passing business, the in-house AV company is then sharing money back with them, the hotel’s providing them an office and contacts and all these things like that, in return the property has an intimate knowledge of everything, all that sort of stuff. You can see how this kind of works. But the big thing to understand with pricing is these kickbacks that are going on. It’s not necessarily a bad thing, but when you start to get into these 60, 70%s, you’re talking about a $1,000 projector, they’re only making 300 bucks on it. That means that for them to make their money that they needed to make to actually take care of that projector, it means they might have to charge three times more expensive in order to keep that going. Keep that in mind as it’s coming to these symbiotic relationships with these kickbacks.

So you might be thinking to yourself, I don’t wanna have to be a part of this. 70%, that’s insanely high, no wonder they’re charging so much. Well, as we talk about in our How to Remove In-House AV Restrictions Guide, which we’ll link down below, but also in past videos where we talked about negotiations with wifi and things like that, all this needs to be negotiated before you sign the contract. If you are deciding that hey, I want the ability to bring in a third-party AV company, you need to make sure that you’re negotiating this out before you sign the contract. Otherwise, as we say, anything that happens, negotiating that happens after the contract is signed, is actually called begging. Make sure that you negotiate this out beforehand.

One important thing to know as well is we talk to some in-house AV companies, they say that sometimes if you talk to the hotel and the AV company, these kickbacks can be adjusted on an event by event basis. Don’t hold us to that because again, it all depends on the property. Are they willing to work with you? Are they willing to win your business? All that sort of stuff, but some of the times this can be adjusted if need be. Again though, it all has to happen before you sign your venue contract as well. Even before you sign your in-house AV contract, all this needs to be negotiated out front.

That’s a quick one. I just wanted to make sure you guys understand kind of how these kickbacks and commission structures work for the hotel sharing business with the in-house AV companies. Just something to keep in mind whenever you’re looking to contract your next AV company for your event.

How to Measure Event Marketing Success

Planning a Safe Event: Back to Basics