How To Use WiFi As An Event Sponsorship Asset

By Will CurranJanuary 22, 2020No Comments

Everybody gather ’round because we’re about to teach you how to use WiFi as an event sponsorship asset! And the reason why we decided to bring you this topic comes down to dollar sign. So, anyone who works in the events industry knows that the price of WiFi has risen exponentially. And it’s not like you can put most events together without the Internet – maybe a silent retreat.

Because here at Endless we’re all about making you money, we’re about to give you some tips. Really good quality tips, at that! Our always amazing host Will Curran is about to tell you exactly how you can save and make money. And all of this by using WiFi as an event sponsorship asset. So press play and join us on this week’s edition of Whiteboard Wednesday! 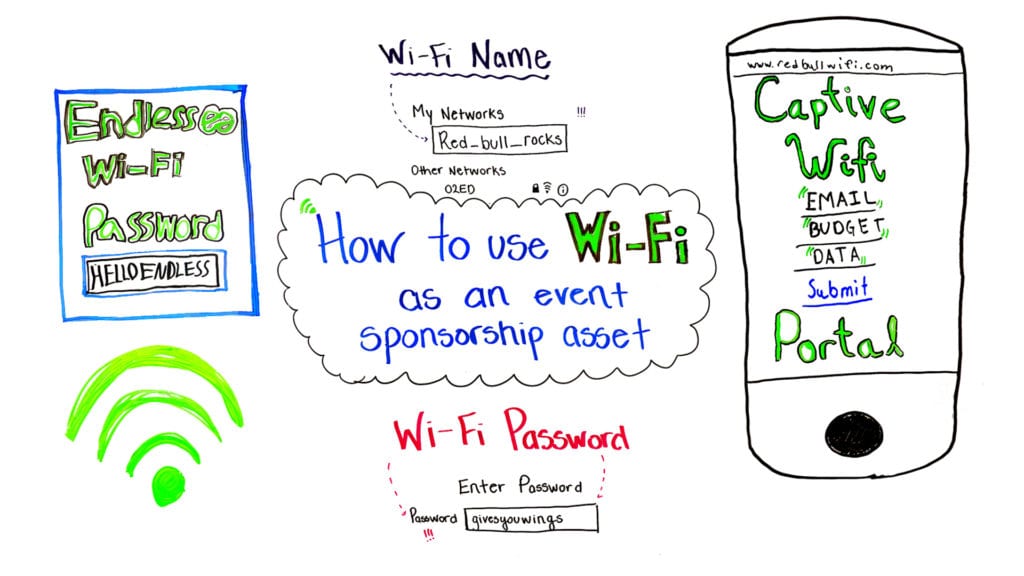 How To Use WiFi As An Event Sponsorship Asset – Video Transcription

Hey, what’s going on everybody? It’s Will Curran from Endless Events back another time with a Whiteboard Wednesday. And today we’re talking about how you can use wifi as an event sponsorship asset. Far too often do we know when it comes to events, the cost of wifi is getting outrageous, right? I’m seeing things as high as 30, 40, $50,000 bills when it comes to wifi. Or you’re getting forced into using some sort of crappy wifi that’s cheaper. We don’t want that sort of thing. So what we want to do is figure out a way to either turn it into a revenue portion or even a profit center for your events, but also covering that cost so then that way you can deliver a great event experience.

So what I’m going to talk about is four really simple ways that you can turn wifi into an event sponsorship asset. And what’s great about these things is they shouldn’t cost you anything. And if they do cost you, maybe the venue is going to charge you to do one or two of these things. It should be very, very minimal because these are all super duper easy. So let’s jump right on in.

Get That Name Out There!

Whenever it comes to your wifi, you’re pulling out your phone or you’re pulling out your laptop and you want to connect to the wifi. What’s the first thing you see when you’re looking for that wifi? Well, that’s the wifi network, right? When you’re looking through and it says, “List all the wifi network names,” and everything like that. Well, that’s a perfect opportunity for some branding and some sponsorship opportunities. Get a sponsor on board for naming the wifi network after them.

For example, in this case, we’re going to use Red Bull as an example. So the network name will maybe name it as is Red Bull Rocks. Or, let’s say for example, your advertising and destination, name the wifi Puerto Rico or whatever it may be. Name that wifi network after a sponsor. And what’s great is everybody, and let’s be honest, everybody connects to the wifi at the events, they’re all going to see that name. Instant brand recognition. So that’s pretty simple, right? That should take absolutely no time. A network engineer can do that in a snap. Super duper easy.

Password Strategy In WiFi As An Event Sponsorship Asset

Well, then there’s the next thing. Password. So many times… I got to preach this still, we talked about cybersecurity and when it comes to events, far too often people are leaving their networks wide open, and they’re not putting a password on it. And we’re not talking about the password for what a captive portal is or like when you go in, a web browser pops up and says enter the password like when you connect to the hotel wifi or something like that, we’re talking about the one that pops up natively in Windows or Mac immediately upon you connecting.

So you always want to make sure that you have a password on the network. The reason why is it’s going to secure, it’s going to make sure all the data across the entire channel is encrypted. And even if it’s as simple as one, two, three, four, it’s going to make your network way more secure. Well, when it comes to putting a password on, don’t just make it one, two, three, four. Turn it into another event sponsorship asset and give it another sponsor. It can be the same thing tied into the name. So for example, if you had Red Bull sponsoring the name, maybe make the password gives you wings. Or let’s say you make it Puerto Rico and it’s like, let’s go to Puerto Rico is the password, for example.

Everyone Will Hear It!

Really, really easy opportunity. And again, everyone’s always going to be asking, what’s the wifi password? Where do I get the wifi from? Yada, yada, yada. Well, here’s another bonus tip for you as well. You could make it so the password has to be gathered by a sponsor. So for example, let’s say Puerto Rico is a sponsor, make it so everybody has to go to Puerto Rico’s booth to get the wifi password. Sure, it’s going to create a pretty big bottleneck at Puerto Rico’s booth. But you know what’s going to happen? They’re going to get a ton of foot traffic right to their booth, which is pretty awesome.

Well, let’s also then talk about another sponsorship opportunity, which is when everyone’s asking about the password, let’s say you don’t put in someone’s booth, you’re going to want to put posters all over the place that say what the password is. Again, another opportunity for branding. And instead of it just saying conference name, the network name or what we call SSID and then the password, maybe say the network name, the password. Wifi brought to you by Red Bull or Puerto Rico or Endless or whatever it may be. And again, you’re getting those sponsorship opportunities as well for someone who is obviously paying to be able to make that wifi happen as well. Super duper easy to do. Again, you’re probably already doing this already. Just turn it into another sponsorship opportunity.

Now, the next one is a little bit more complex but super duper powerful. And that is what’s called a captive portal. And it was kind of what I was alluding to earlier when it comes to the password. For example, you connect into your hotel wifi for example, and you find out that you connect and it says, “Hey, you need to put in your room number and your last name,” for example. That’s what I call a captive portal. Whenever it’s like a web browser-based or when you connect to your phone, it automatically pops up over it.

What’s great about these captive portals is a couple of things. First of all is that very similarly, is that you can make the password a branding opportunity as well. But also these pages are 100% a webpage, which means they are completely customizable. Changing graphics, colors, theming, all that sort of stuff. So you can put logos on here. If you’ve ever been to an airport before, you can also have it set that, for example, they have to watch a video in order to continue on. Maybe you don’t want to do that, and then they’re having to watch a video in the middle of the general session when they’re connecting.

But again, lots of opportunities. It’s a full webpage. There’s a lot of really cool things. What I recommend though, is that there you can install a very, very simple form on this. So not only can you make it so it has a password, but for example, you could do things that collect email addresses. Say, “Hey, in order to connect to the wifi, please give us your email address.” Well, imagine if you make it as part of that privacy policy and terms of conditions are that the user is agreeing to share their email address with the sponsor.

The sponsor can send out a simple email and say, “Hey, thanks so much for attending. I hope you enjoyed the wifi. We were really happy to provide it,” whatever it may be. Obviously figure out what that play is so then that way you’re being really conscious of user data. But what’s also great is you can add additional forms as well. For example, let’s say you had a simple question about the budget, for example, what is your event budget? How much budget are you spending on this? You could add that as a question.

You can do approach to anything. You make this an open field and say like, “Tell us your favorite cat in the world.” I don’t know. There’s a lot of different options when it comes to it and obviously, they submit and then can connect to the wifi.

So these captive portals are pretty darn easy to create. Most network systems have a very simple version of it so you can at least do things like email or a password or things like that. But if you want to add a little bit more complexity, things like video, things like… Again, these aren’t massively complex and your network engineer should be able to do it relatively easily. Again, negotiate all this sort of stuff as we always talk about before you have your venue contracts so we can make sure it’s included as part of your wifi package and everything that you do.

But this can give you a huge opportunity because if I’m a sponsor and I’m saying I’m putting for example, $30,000 up to cover all of the wifi and I know that I’m getting all these branding opportunities. Plus I’m allowed to collect user data somehow and get some more feedback as far as how attendees are doing whatnot and this and that.

So again, this is just four really, really simple and easy things that you can do to use WiFi as event sponsorship asset. So super duper cool. I would love to hear, do you have any other ideas when it comes to wifi and what you’ve done creatively to cover the cost when it comes to wifi at your events? I would love to hear it. Make sure to leave a comment down below. If you liked this video, make sure to smash that like button. If you disliked it, feel free to give a thumbs down, but leave a comment down below.

What can we do better? Will talking too fast. Who knows what it could be? I definitely want to hear from you guys, and if you really, really love this content, make sure to subscribe, because we send this stuff out every single Wednesday. That’s why we call it Whiteboard Wednesday. So make sure to subscribe and we’d love to see you on the next one. Again, my name’s Will Curran. This has been, how to use wifi as an event sponsorship asset. Whiteboard Wednesday. Let’s get out of here. Have a great day.

The Future of 5G at Events

How WiFi 6 Will Change the Event Internet 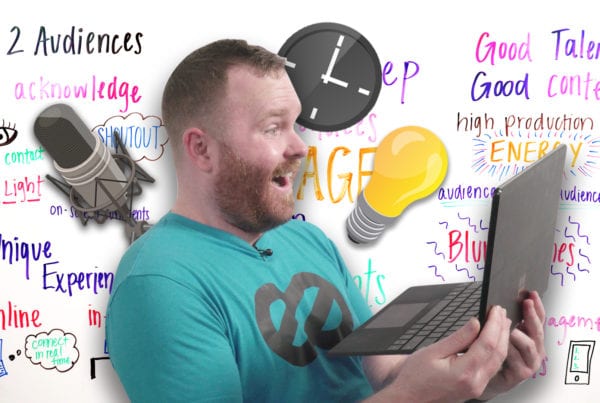 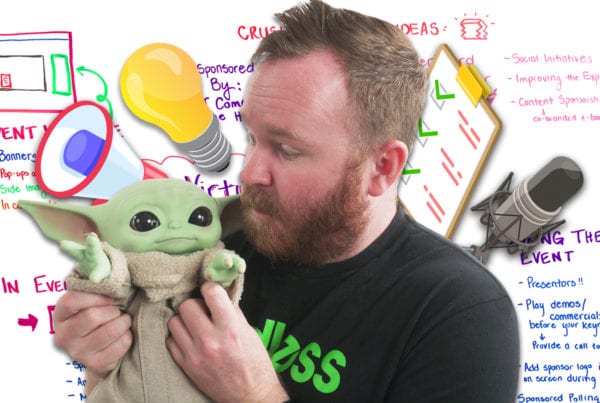 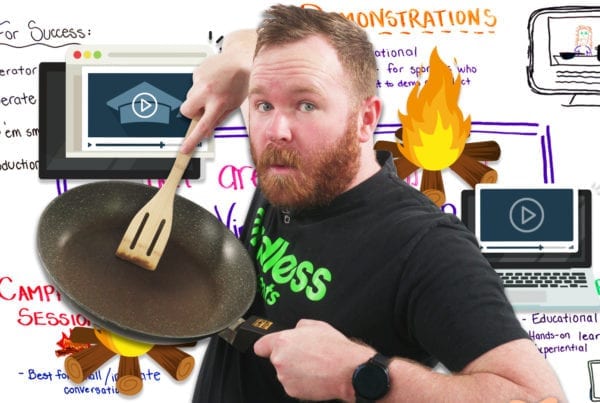 More posts by Will Curran
Converting your in-person event to a virtual event? Watch our webinar